In the heart of the Mediterranean, overlooking the sea.

Those who choose to spend the holidays in Marettimo will never forget the hundred of shades of blue that can only be found here.
This magical place is the most distant island from the Egadi Islands, in the Province of Trapani.
Marettimo is, among the islands of the archipelago, the wildest and most rich one in vegetation. A paradise that offers great emotions to sea, diving and snorkeling lovers, but also to those who love the mountains and culture thanks to a rich historical-archaeological heritage.
On the island time stops and returns in a dimension marked by slow rhythms, made of small daily pleasures. Only a few cars circulate in Marettimo (traffic to cars is inhibited, only some are authorized). Breakfast at the bar overlooking the sea, a boat ride, an aperitif at sunset and a dinner with fresh fish all contribute to making your holiday on the island even more memorable. 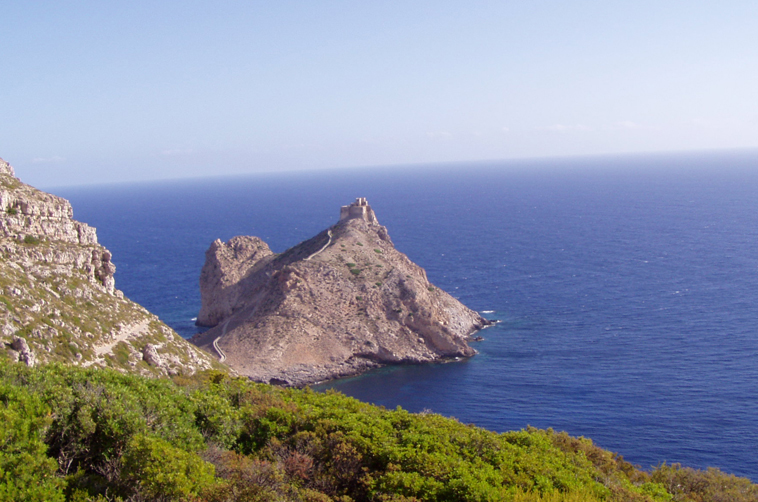 The suggestive castle of Punta Troia is perched on the homonymous promontory, it can be reached through a path that offers a privileged view of the sea.
The first known construction on Punta Troia is a watchtower dating back to the 9th century, during the Saracen era.
In 1140 Roger II of Sicily transformed the Saracen tower into a real castle, but it assumed its present appearance in the seventeenth century under the Spanish domination.
The water tank that surrounds the entire perimeter was emptied and transformed in a prigione by the Spaniards.
The same destination was given by Ferdinand II in 1795, opening the tank to those convicted of political crimes.
In 1844 the Bourbon king decreed the abolition of the castle.
During the Second World War the fortress was used as a military light and later abandoned to itself until a few years ago, when it was transformed into a modern cultural pole.
Today it hosts many exhibitions and events, even international ones, it also houses the Museum of Prisons and an observatory of the Mediterranean Monk Seal.

The Roman Houses and the Byzantine Church

Another face of the “archaeological” Marettimo is located at 250 meters above sea level and offers a unique panorama.
The “Roman Houses” were built after the first Punic war, around 150 BC, as a small military garrison to control the naval route between Tunisia and Rome.
On the same promontory there is a charming rural church of the Norman period (XI-XII century) built by Basilian monks, of Greek language.
It has a rectangular structure, a single nave divided into three spans, barrel vaults and four central pillars. The central nave, the highest, ends with a hemispherical vault.
It has a style that is very similar to the Eastern one, presumably because it was built around the 11th century by Byzantine monks, on a previous base of Christian worship.
From 25 April 2010 the church has been returned to the worship of the faithful. 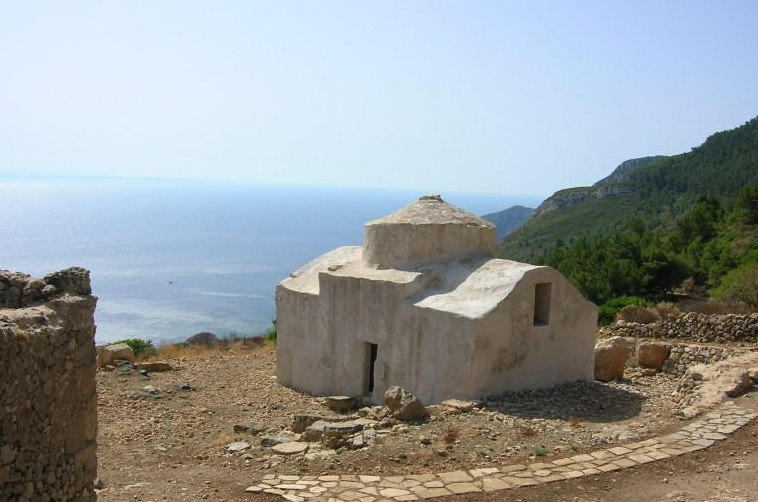 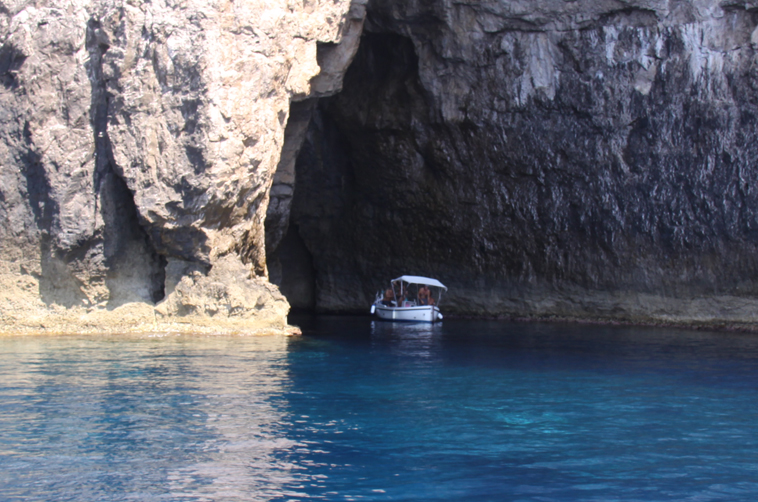 Only after having explored the entire perimeter of the island by boat and discovered the caves, you will realize how fascinating is Marettimo and how many shades of blue there are.
The tour of the island by boat is an experience that you will never forget, you can truly feel the richness of the natural heritage.
Marettimo has about 400 caves between emerged and submerged, in some of these you can go by boat: the cave of the Camel, the cave of the Thunder, the cave of the Nativity.
The Camel cave (grotta del Cammello) takes its name from a camel-shaped rock, visible from a witty view, it is characterized by a large cave and a small pebble beach.
The cave of the Thunder (grotta del Tuono), is another obligatory stop; takes its name from the sounds produced by the sea inside it and is characterized by deep waters of a beautiful and intense blue.
Going beyond Punta Mugnone, the windy and fascinating scenario of the west coast begins, full of numerous caves and coves, very high rocks overlooking the crystal and deep sea.
This leads to the Bombarda cave, so called because of its characteristic “breath” created during the storms within a small fissure.
The cave of the Nativity (grotta del Presepio) takes its name from stalactites and stalagmites eroded by the sea and the wind, assuming forms resembling the statues of the nativity scene.
In Cala Bianca (White Cove) you have to dive. One of the most beautiful and evocative coves existing, it is an expanse of blue difficult to describe and to compare to any other corner of the sea.
The entire circumnavigation of the Island reserves surprises and emotions, you will return to the mainland with a baggage of colors engraved in your mind.

The archipelago of the Egadi Islands is formed by three large islands: Favignana, Levanzo and Marettimo, by other four smaller ones: Formica, Maraone, Stagnone and Galeotta and some other microscopic ones, practically rocks.
Tens minutes of navigation away from Marettimo you reach Favignana and Levanzo, two beautiful islands, each one with its specificities.
Favignana is rich in vegetation, can easily be visited by bike or scooter, has a lively historic center and low and white houses with colored fixtures.
Several beaches, with sand or pebbles and numerous opportunities for a dip; the most famous bay is Cala Rossa, an expanse of blue sea framed by cliffs.
Cala Azzurra, Lido Burrone, Bue Marino, Punta Faraglioni are other must-see stops during an excursion on the island.
Levanzo is the smallest of the Egadi Islands well known for its caves, among which some of particular historical-archaeological value as the Cave of Genovese (La Grotta del Genovese).
There are also small coves of sand or pebbles, also an interesting archaeological – underwater itinerary for diving and snorkelling enthusiasts.
It has a small inhabited center ideal to relaxation. 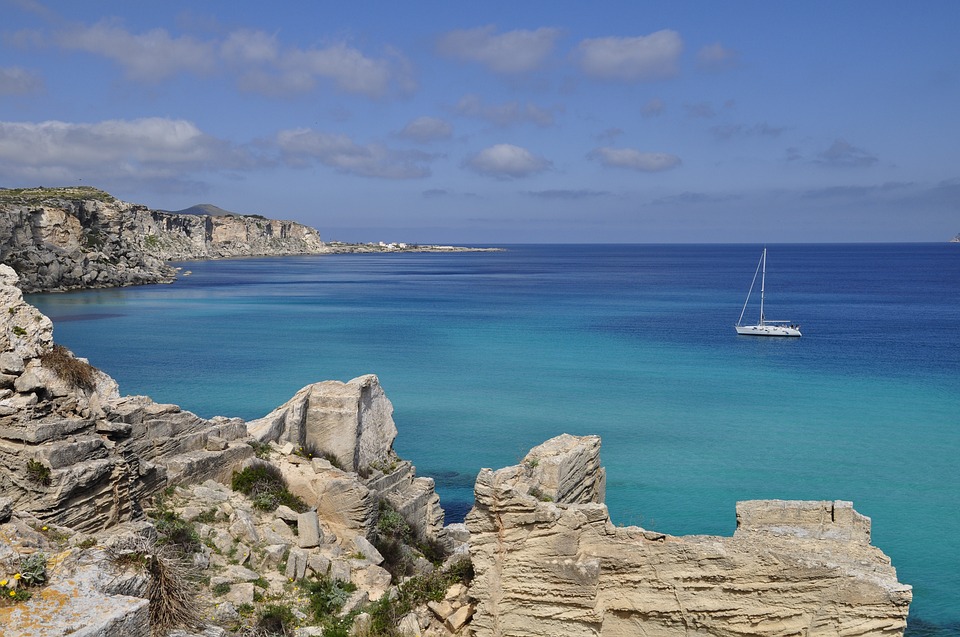 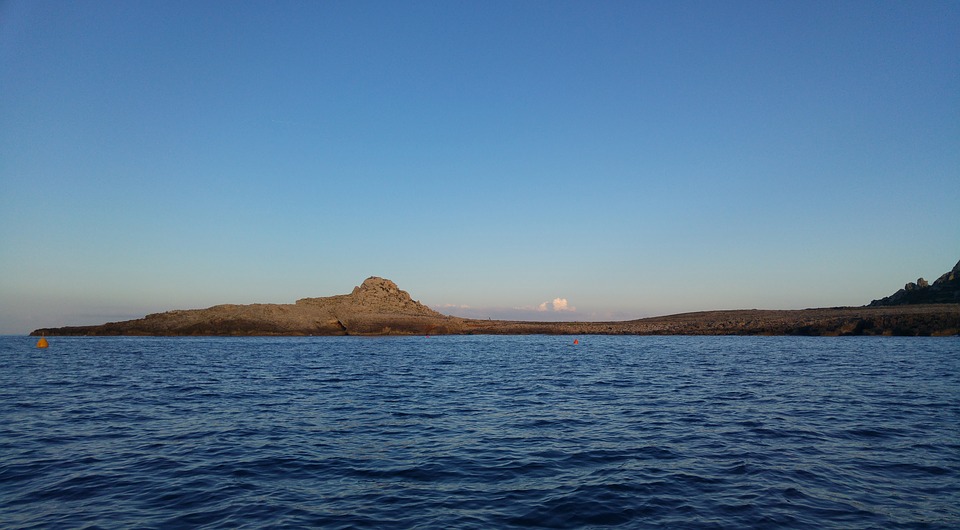 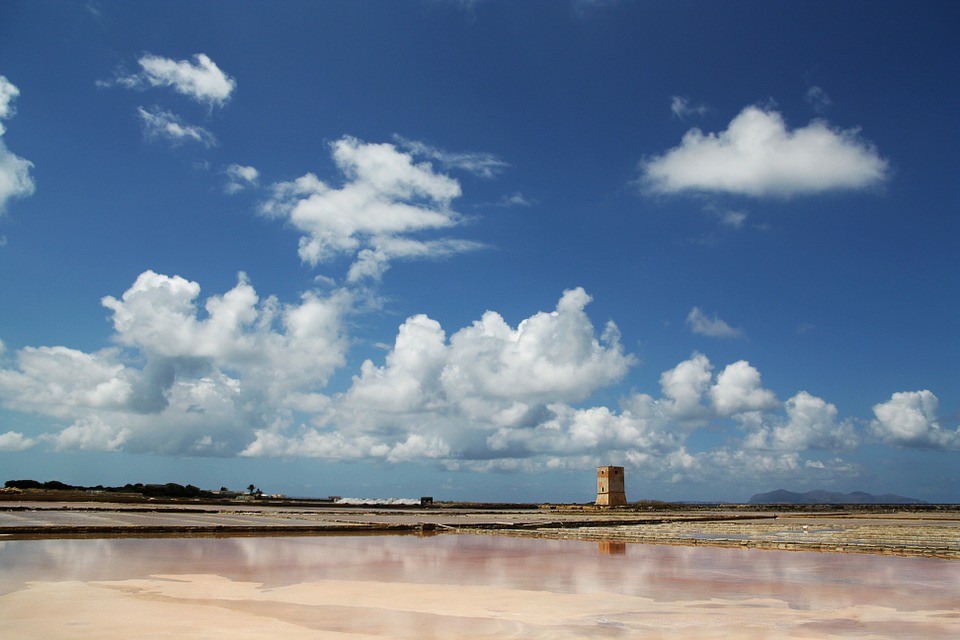 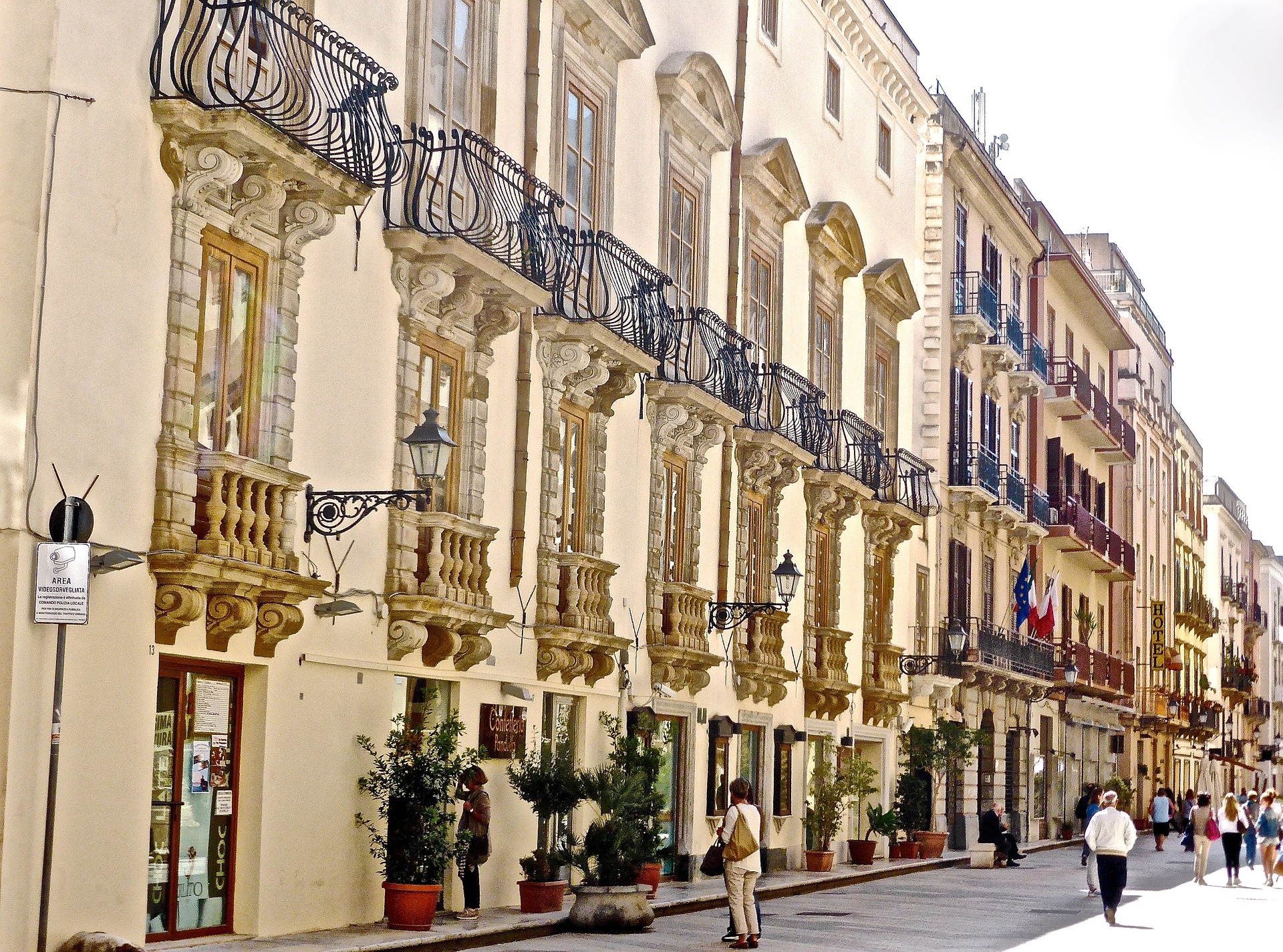 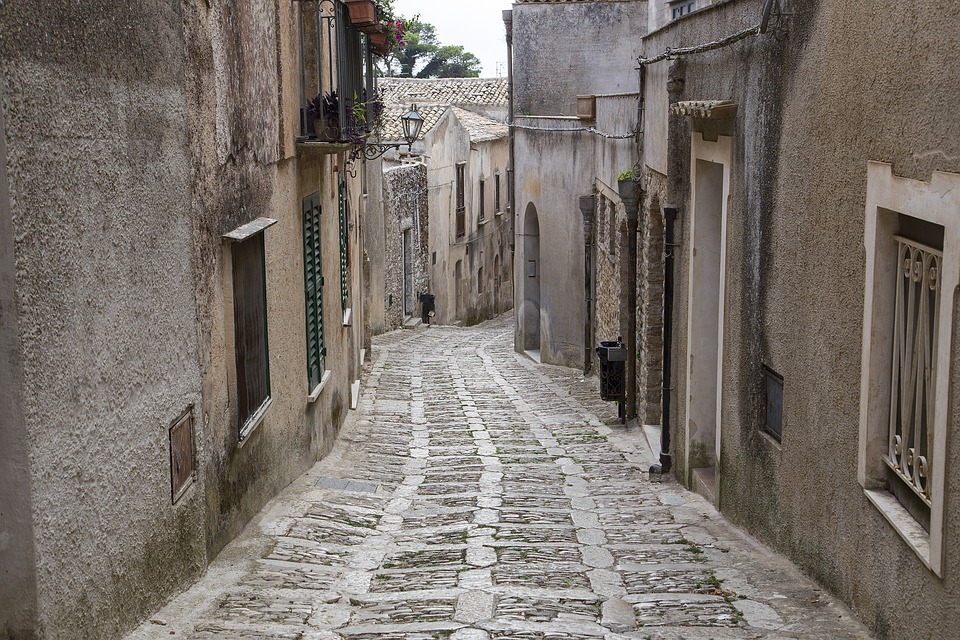 The Province of Trapani

The Province of Trapani is rich in historical and naturalistic treasures with unmissable stops during a holiday in Sicily.
From Marsala to the Salt pans, from the historic center of Trapani to Segesta and Erice, there are places that capture travelers and tell about millennia and so many cultures.
Marsala is the land of wine, a lively center for enotourism, an interesting destination for its civil and religious architecture, it has a historic center that tells the story of Garibaldi and the thousand. The heart of Marsala, once surrounded by city walls, is now marked by bastions from which alleys and narrow streets branch off, overlooked by splendid historic buildings and churches.
The Via del Sale (The Route of Salt), that connects Marsala to Trapani, is a dazzling path between white heaps of salt and mills of the sixteenth century.
A path that runs along the sea 29 kilometers long and which tells of fatigue, dedication and even folklore.
Mozia is a must for those who walk the “via del sale” (salt route), it is an ancient Phoenician city on the island of San Pantaleo, inside the Stagnone, whose structure and other important remains are still preserved.
Trapani is a charming port city. Its historic center is a sickle that laps two seas and on its cobbled streets overlook beautiful historic buildings.
Tramontana walls mark the perimeter of the city along a charming promenade overlooking the sea.
A few kilometers from Trapani, the homonymous medieval village stands out on Mount Erice.
An enchanted place among castles and gardens that benefit of captivating views and blooming courtyards between palaces and houses.
Be enchanted by beautiful places and a soft soul territory.